Today is Friday. On Wednesday night while watching the Voyage (Travel) channel here in Paris, they had 24 Heures Avec Anthony Bourdain, or, as we know it back home, The Layover.  Well, this layover happened to be Paris.  One of the places, or rather things he did was to try the food truck, Cantine California.  I went on to their website and found that they park themselves in my hood on Fridays, at the Marché Raspail which happens to be on my way home from school.  They hangout there from 11a – 2p and I happened to hit it perfectly at 1:30p.  The truck only has a few things on the menu but the main thing is hamburgers done about 4 ways and tacos done about 3 ways.  For the burgers, it’s all  bio beef (organic) from French cows and the tacos are also bio and you have your choice of carnitas (pork) or chicken.  The tacos come with frijoles and the burgers with fries.  You have no choice, that’s it!  I wanted a burger only today.  Maybe next week I’ll check out the tacos.  Anyway, it does make it easy to choose and they are roughly 10 – 12 euros for most of the menu items.  My Classique Burger with Fries was 11 euros, or roughly $14 US.  Now, coming from Southern California where we have In-N-Out, the burgers here are highway robbery.  At In-N-Out you get the double double, fries and soda, if you drink soda, for about $6 US or about 4 euros.  HUGE difference.  Now the bun and fries here I would say are better than In-N-Out and here you get bacon in your burger unless you tell them not to add it, which I did hear some French people say no bacon, but value for flavor ratio, I would say In-N-Out wins.  Now, being that I am over 6,000 miles from the nearest In-N-Out, this burger from Cantine California is a pretty good substitute while I’m here in Paris.  Now this is the first burger I’ve had since I came over here and I only tried it because I saw the show and then got the craving.  The show emphasized the burger and didn’t really talk about the tacos but I’ll have to try those as well as I did see other munching on the tacos and they looked pretty good.  One thing I have not seen in Paris is corn tortillas.  Even the tortillas here at the truck were flouer and I didn’t hear them ask anyone any questions regarding the choice of corn vs. flour.  Me, I prefer corn, so that might be another reason I decided to go with the burger.  I heard the cooks and servers speaking and they sound like they are either American or Canadian but don’t know how authentic the name, Cantine California, and the actual owners go.  I do know and have seen on another food show here in Paris that food trucks are catching on and even a couple of chefs with cred are opening food trucks.  This food truck comes with a few pub height tables, with ketchup and hot sauce, napkins and a tarp to eat under and to wait for your food.  There was quite a crowd waiting for their order and you can pay by credit or bank card if you need to.  I took mine to go so I could eat it in the comfort and warmth of my own crib.  Plus, I wanted a glass of wine with my burger, and they did not sell any.  They only had cokes and water for sale.  Anyway, it was a tasty and very filling burger.  Another “American” thing they did was they allowed you to have the meat cooked to your liking.  Normally, the French cook meat the way they think it should be eaten, not the way they think you would like it.  But here, I must agree with the French.  I heard a Spanish lady say she wanted hers well done and I thought, NO, your going to ruin it!  Well, to each his own. 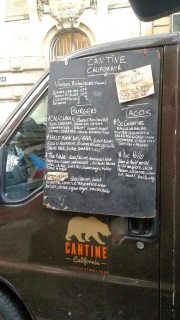 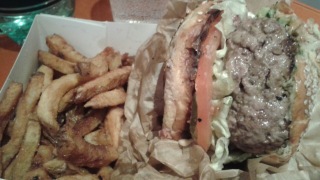