On Wednesday, April 2nd, I took another bus tour out to two chateaux that are both about an hour outside the city of Paris, Vaux-le-Vicomte and Fontainebleau.  Fontainebleau is the more famous of the two, but for me, V-le-V was the more majestic, well planned and retained its grandeur.  Fontainebleau seems to have been chopped by the city that now surrounds it.  V-le-V has a symmetry from its original plan that has been preserved.  I like symmetry.

http://www.vaux-le-vicomte.com/en/
http://en.wikipedia.org/wiki/Vaux-le-Vicomte
The 3 principal men involved in creating the beauty of V-le-V were Le Brun, Le Notre and Le Vau, they also created Versailles.  But V-le-V is smaller and classier.  Versailles is almost vulgar, in my eyes anyway, in its scale and opulence.  I love the gardens at Versailles, but the palace is too much and almost has too many visitors.  The but got us to V-le-V as it opened and I felt like I had it all to myself.  An audio guide was included with our entrance ticket and if you listen to most of it, including some extra info recordings, it will take you about an hour and a half.  I then strolled the gardens and ate my lunch that I brought with me on one of the garden benches.  It was sunny but cool and it was a very pleasant time.  We arrived close to 10a and left at 1:30p. 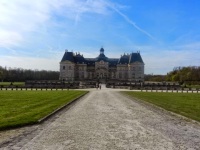 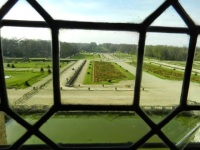 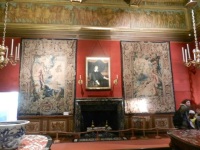 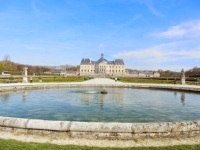 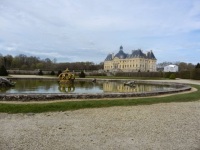 http://www.musee-chateau-fontainebleau.fr/spip.php?lang=en
http://en.wikipedia.org/wiki/Palace_of_Fontainebleau
It only took us about 30 mins to get to Fontainebleau and our entrance fee and audio guide were also included for this chateau.  This chateau is larger than V-le-V but it is not as well planned.  If you see older paintings of it, it does look better but I suppose after the state took it over, the city encroached on it and so it doesn’t have as much acreage as it used to have.  There’s a large street that runs sort of diagonally right in front of the entrance gate and there is not quite the symmetry in the gardens.  Whereas V-le-V was designed for there to be an interaction between the chateau and the gardens, I’m not sure that Fontainebleau took the two areas in mind when they were designed.   Napoleon the first was also here for a short time.  Boy, did that guy love himself!  Apparently, he was very preoccupied with personal hygiene.  That’s not a bad thing, but that theme repeated itself quite a bit and I thought that maybe Napoleon had a compulsive disorder.  That wouldn’t be unusual given his megalomania.
We left at about 5:15p and got back to the drop off point in Paris, by the Tuileries gardens, before 6:30p.
I felt the tour gave ample time at both chateau given that both were not very crowded but it is not the height of the season.  I suppose if the lines were long to get in, it might seem just a bit tight.  V-le-V is not open in the winter.  Its season runs from beginning of March to mid-November.  Fontainebleau is open year round, but I would actually recommend you skip it in favor of other chateaux, including Versailles.  If it was a choice between Versailles and Fontainebleau, I’d go with Versailles.  But, if it’s between the 3, I’d go with Vaux-le-Vicomte.  Can you tell I really enjoyed that one? 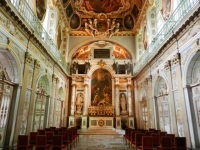